We just returned from a whirlwind family weekend in New York. Our daughter is spending her summer there as an intern and of course, a visit was a must! We tried to schedule as much as we could in a short time, and we were pretty successful. On the agenda was the NBC Studio tour, SpongeBob SquarePants, the Musical, the 9/11 Memorial and Museum, Chinatown and as many other restaurants as time (and our stomachs) would allow. 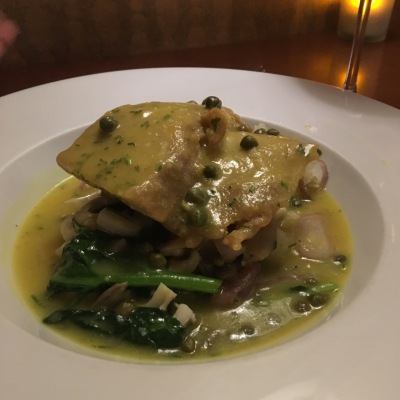 Before our trip, I reached out to my vegan Facebook and Insta networks asking for restaurant recommendations. A place called Candle 79 was mentioned by more than one person, so that was my pick for Saturday night’s dinner.

I took a look at their website ahead of time, and their story is pretty incredible. Their story began in 1984, when Bart Potenza purchased an existing health food store and juice bar on the Upper East Side. A few years later, a frequent customer, Joy Pierson, became the house nutritionist and eventually joined the business as a partner. Their restaurant was very successful and they were eager to expand. As luck would have it, on a Friday the 13th in 1993, Bart and Joy won the lottery….$53,000! It was enough to open Candle 79…and I guess the rest is history. They now own and run three restaurants in Manhattan–what a success story.

We arrived at the restaurant a little early. Note to reader: we are ALWAYS early. The restaurant is on a beautiful tree lined street on the Upper East Side. It’s a cozy and charming two story space. We had a seat at the bar and had a cocktail while we waited to be seated at our table. The atmosphere is very clubby with soft lighting and rich woods. We were taken upstairs to a cute little booth in the middle of the space. A reservation is a must; every table was occupied.

The manager stopped at our table to answer any questions we had and she made a few suggestions. We ordered Lobster Ravioli, Seitan Piccata and Vegetable Ravioli. We also ordered an artichoke appetizer that was special that night. And let’s not forget the Polenta Fries, Oh my! My pictures do not do this meal justice in any way. The dim lighting and my laughter kept interfering with my picture taking skills. Just take my word for it, it was the best meal any of us had ever had (including the two “flexitarians” at the table).

If you have the opportunity to travel to New York, please think about a meal at Candle 79. You will not be disappointed.

Until the next meal,

This site uses Akismet to reduce spam. Learn how your comment data is processed.