If you’ve been wondering where I’ve been lately, I was immersed in a complete Gossip Girl binge-watching frenzy. What started out innocently when I scrolled through the Netflix menu turned into a months long obsession of Blair, Serena, Chuck, Nate, Dan and the rest of the gang. My every spare moment was taken with wondering who Gossip Girl was and when will (s)he be revealed.  SPOILER ALERT: It was Dan Humphrey!!! I even downloaded 10 episodes to watch on my tablet while I was on a 5 day cruise.

I know I’m extremely late to the party where all manner of GG is concerned. The show began its run in 2007 and lasted for 6 seasons.  Thank you, Netflix, for allowing me to peer into the lives of Manhattan’s Upper East Side and giving me more than a mere glimpse into their complicated and seriously dysfunctional lives. Between all of Blair’s schemes, underage drinking, dating crises and cynical plots were the waffles!

Waffles seemed to be the star of almost every episode. During season one, Rufus had waffles ready for Dan and Jenny as they made their daily trek to their exclusive private school from their humble Brooklyn loft. In subsequent seasons, after Rufus finally married Lily and he moved into her luxurious penthouse, waffles were always on the brunch table. It became a running joke, pretty much, that everyone involved in a Humphrey breakfast was consuming waffles.

I love a good breakfast waffle as much as the next gal, but today I’m giving you a much better option. And believe me, these are appropriate for breakfast too, if you want. I present to you…Oil Free Waffle Iron Fries

Place one on each plate, then smash them! 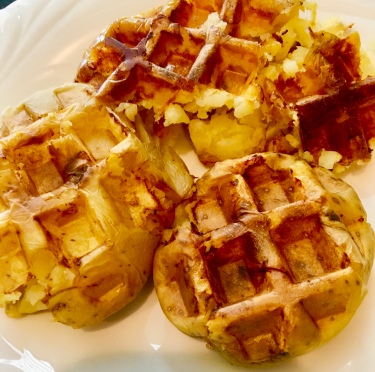 This is a pretty simple recipe. You will need Yukon Gold potatoes. I usually buy a 5 pound bag so I always have them on hand. You first need to wash the quantity of potatoes that you would like to have. I suggest baking a LOT of potatoes, because once you taste how delicious these are, you won’t want to share!

Bake the potatoes in a 400 degree oven for 45 minutes to an hour. The cooking time depends on the size of the potatoes. When the potatoes are almost done, heat up your waffle iron.

Once the potatoes are done, you place a potato on each side of your waffle iron. My iron only has two plates, so I place one potato on each side. Next, close the lid and smash the potato so that the lid closes completely. Now you wait patiently. The key here is NO PEEKING. Let the potatoes cook for at least 8-10 minutes. Carefully lift the lid and remove your “fries”.  Continue until you have used all your potatoes.  If the potatoes are large, you can cut them in half before you press them into fries.

Enjoy with ketchup or your favorite condiment.

These waffle fries are Oil Free, Fate Free and absolutely delicious. They make a great side dish or you can make a whole meal out of them, as I typically do, adding some green vegetable and perhaps a side of beans.

Snap a pic of your waffle fries and tag me @heidicooksplants on Instagram. I know you’ll love these as much as I do!

P.S., Dorota is still the best character on the show, just sayin’

This site uses Akismet to reduce spam. Learn how your comment data is processed.